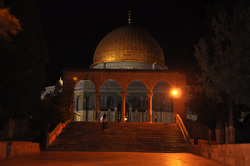 Sample Test Questions 1. Muhammed's married a woman named Khadija who was about 10 years his senior. She was........  A. His first convert.  B. A wealthy widow  C. Daughter of a Shah  D. A former Christian crusader.
2. Muslim mathematicians pioneered the study of? A. Architecture  B. Geometry  C. Engineering  D. Algebra
3. The journey of Muhammed from Mecca to Yathrib(Medina)? A. Zakat  B. Muezzin  C. Hajj  D. Hijra
4. By the 700s the Umayed caliphs were being criticized for A. Moving to Baghdad  B. Enlisting Janizaries  C. Developing a luxurious lifestyle  D. Converting to Christianity
*** Extra Credit***Explain (for 10 points) why the Muslims allow no pictures or symbols of Muhammed in their Mosques. What is the religious philosophy behind this?
*****Extra Credit***** Watch the attached  video for 30 minutes and summarize 1 page. (10 points)